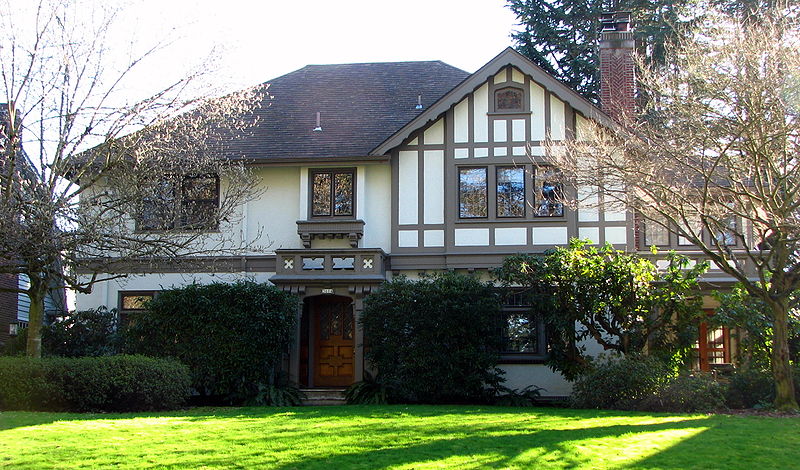 Louis J. Bader And Later Owners
Louis J. Bader was born in Chicago, Illinois in 1878. Louis Bader, his wife Lillie, and their children Edith, John and William, moved to Portland from Illinois in 1910 for reasons of health. They joined many other young families that moved here after the Lewis and Clark Exposition. Bader had been president of the John Bader Lumber Company in Chicago, and possessed
extensive knowledge of the lumber business. (10) The family's first Portland residence was rented at 31 East 61st, near the base of Mt. Tabor. The simple wood frame building was their home for only one year, when they moved to the Alameda Ridge area. Here, near the intersection of 47th. and Alameda, they lived from 1911 until 1922. The house was a large wood frame bungalow. During these years, the Polk City Directories identify Louis Bader as serving in various occupations, including salesman, lumberman, and as an employee of the American Map and Reproducing Company. In 1921-22 he began marketing real estate. He continued doing so during the years that he owned the Oak Street residence. (11) In 1914, Louis and Lillie Bader had visited Europe, escaping just before the outbreak of World War I. It is believed that the homes and gardens Louis Bader saw on this trip influenced the designs he later chose for his own home and garden. The Oak
Street residence was the first of Bader's Oregon homes to displayhis European tastes through imported materials and rich wood accenting. Bader also financed many of the fine homes built in the Laurelhurst district. (12)
The Baders were a private family, and enjoyed the refuge provided by their home and garden. Friends were, however,
invited to frequent parties held by both the children and the parents. The brothers were members of Kappa Alpha Pi, and with
their father, belonged to the Lumbermans' Association. Mrs. Bader was president of Pi Phi, and was a musician. The religious
family were members of the St. James Lutheran Church in downtown Portland. The family's parties were held in the garden and the large basement room. When Edith Bader married in 1931, she decended the main staircase to the ceremony held in the living room. Louis Bader died in 1950.
•
The Baders owned their new home from 1922 until 1936, when it was sold to Dr. Merl Margason, M.D. (13) The Margason family owned the property until 1980, and maintained the house as originally designed by DeYoung and Roald. Dr. Margason is noted for his principle leadership in the evolution of the Portland Clinic, which is still in existence. Dr. Margason practiced
medicine in Portland for fifty years, serving as the President of the Multnomah County Medical Society in 1950. His speciality was neurology. (14)
In 1980, the Bader House was sold to William and Kristin Bishop. They kept the home until it was purchased by the current
owners, Roberta Siegel and Nathan Sanders, in 1987.

ARCHITECTURAL SIGNIFICANCE
House
The Bader House, designed by the architectural firm of DeYoung and Roald, is a particularly elegant example of a high
style Tudor house. Many exterior elements of the house are characteristic of the style, including decorative half-timbers,
extensive heavy detailing, cross gables, bays, and front and side porches. The craftsmanship throughout is of high quality, as illustrated by the sun room's exterior paneling; the porches withtheir heavy brackets and Italian tile floors; and the massive
window casements framing leaded windows, some with brick sills. DeYoung and Roald used decorative, non-structural, halftimbers, a feature typical of Tudor houses, and of stucco cladding, in designing the home. They included extensive, heavy, detailing in their design. The tall, multi-paned leaded windows, set in heavy wooden frames, are common in Tudor homes, as are brick sills and heavy brackets supporting overhanging bays. All are present on the Bader House. Also important in Tudor architecture are massive chimneys, usually of brick or stone, and the large main chimney of the Bader House gives focus and balance to the home. It is further typical of Tudor chimneys as it serves several fireplaces.
Placement of the chimney calls attention to another characteristic of Tudor buildings present in the Bader House, the use of intersecting gables, for the chimney rises from the valley formed by the front and west gables of the roof. The southeast
wing is capped by a third intersecting gable. Small entry porches similar to those of the Bader House are found on many
Tudor homes. The elegance of the porch is increased by the second floor bay window that carries the porch's lines upward.
To the west, the lines of the front facade sweep upward to the gable, and the overhanging second floor of the gable's salient. The front gable, and the overhanging half-timbered salient, are typical of Tudor buildings. Overhanging salients and bays are also present on the south (rear) and east facades. The two-story bay on the east side is particularly elegant, combining the first floor semi-hexagonal bay window with the second floor rectangular salient.
The use of stucco for nearly all cladding on the Bader House is unusual in Tudor homes, as most combine large surface areas of brick, stone or wood with stucco. However, in its use of multiple materials to add decorative highlights, as illustrated
by its brick window sills, wood panels on the sun room, and wood brackets on the porches and under the second floor bays, the Bader House is typical of Tudor homes. Overall, the simplicityof the Bader House's half-timbered stucco adds to the elegance to this classic building. (15)The interior of the Bader House has an ambiance of comfortable luxury. The materials and craftsmanship throughout are exceptional. The use of Italian tile and marble in both building and garden add great beauty to the home. The marble is particularly striking in the ballroom, with its deep red-brown tiles alternating with white in a checkerboard pattern. Tile floors grace the front and rear vestibules, and the front and side porchs. The oak floors throughout the house are typical of the finest homes of the era. Golden oak and rich mahogany paneling is found throughout the building, and is most striking in the main entrance hall, the dining room, and the upstairs hall. Wide, heavy, window frames of oak or mahogany add great elegance to the windows. One of the most striking details of the house is the large tripartate window at the top of the main staircase. The heavily framed windows overlook the garden at the rear of the house, and are highlighted by small fleurs-de-lis at the cross joints of their white metal leading. The massive stone fireplaces in the basement and living room are reminiscent of the grandest of Tudor buildings, as is the overall luxury of the home. Nearly all of the original light fixtures are in place throughout the house, and represent a high quality of craftsmanship and materials. The large scale of the ballroom, living room and master bedroom increase the feeling of luxury characteristic of the great homes of England. The golden wallcovering, bronze light fixtures, and the rich oak paneling of the sun room add to the luxury of the house. The formal elegance of the house, however, does not distract from its comfort. It is a superbly designed and Grafted house in the Tudor style, and it is a home conducive to family living.
Garden
The wide windows at the rear of the Bader House frame panoramic views of the formal garden, and allow the garden's
sense of ordered peace to radiate into the home. The formality of the symetrical garden further complements the elegance of the house. The lower terrace of the garden sweeps south from the house to the classical fountain set in its shallow pool. Marble steps, flanked by concrete urns, rise to the upper terrace. Here, the wide marble path leads to a circular path and flowerbed, and then to the covered marble platform and its garden bench, centered at the southern end of the garden. From the bench, the view sweeps back across the garden to the house, and the rear porch and pergola that link garden and house. The classical and uncluttered arrangement of elements within the garden found its roots in the Italian garden. The Bader Garden follows this tradition in its simple interior layout and its perimeter of clustered plantings. The perimeter plantings
clearly define the space as separate and private from the surrounding yards, and reflect the Italian tradition of a garden as a refuge from the world. (16)

James DeYoung and Knud Roald. Architects
When Louis J. Bader decided to build the home that carries his name, he hired one of his Alameda Ridge neighbors, James
DeYoung, to design the luxurious house. James DeYoung was born in Grand Rapids, Michigan, in 1885 and came to Portland in 1907 at the age of 22. The 1908 City Directory identifies him as a draftsman for the architectural firm of Doyle and Patterson, where he stayed for two years. In 1910, he joined the firm of J.B. Pinkington, but soon changed jobs again to work for the firm of L.R. Bailey. During this period he met fellow architect Knud Roald, who became his partner in 1919. (17)
DeYoung and Roald are primarily known for their commercial  designs completed in the 1920s, including: the Hamilton Arms
Apartments (1928); the Douglas Building, 3525-45 S.E. Hawthorne (1929); the Rex Manor Apartments (1929); and the Heathman Hotel (1927), for which they served as supervising architects. The Heathman Hotel and the Douglas Building are on the National Register of Historic Places. The first of DeYoung and Roald's buildings to be placed on the City of Portland Historic Resource Inventory was the Seventh Church of Christ, Scientist, completed in 1919. In addition to the Bader House, the partners designed a number of other Tudor style buildings. In 1921, they completed the St. Johns Methodist Church, a building having many stylistic similarities to the Bader House. All of the above buildings are on the City of Portland Historical Resource Inventory (1984). The architects also designed a Tudor house at 2620 N.E. Fremont (major alterations were made to the building in 1950), and the John Dodson House at 3641 N.E. Couch, both in 1927. The Dodson House is a smaller, more modest, example of the Tudor style. (18)
The firm was active until 1929, when the partnership dissolved and DeYoung and Roald joined other firms. DeYoung
worked with DeYoung, Moscovits and Rosenberg, the firm that handled the renovations to the Yeon Building and to the Meier and Frank Building in 1930. DeYoung left in 1931 and founded his own firm where he remained until retirement. (19) He died in 1967 at the age of 82. (20)
Knud A. Roald was born in Norway in 1878 and educated at the University of Dresden in Germany. He came to the United States in 1911 and soon after met James DeYoung. He also is accredited with designing "many schools, hospitals and residences" in the Pacific Northwest. He died in 1965 at the age of 88. (21) George Qtten. Landscape Architect
George Otten made a significant impact on landscaping and landscape architecture in Oregon during the many years that he
served as landscape architect for the Oregon State Highway Department. He is credited with designing the old Swan Island
airport, sections of Canyon Road in Portland, and with laying out the new Columbia River Highway in such a manner as to save the beaches and recreation facilities of Rooster Rock State Park in the Columbia Gorge. (22) He was also landscape architect during the rebuilding of the Oregon State Capitol after the fire of 1935. (23) The Bader Garden represents early work by by this important Oregon designer and civil engineer. (24)