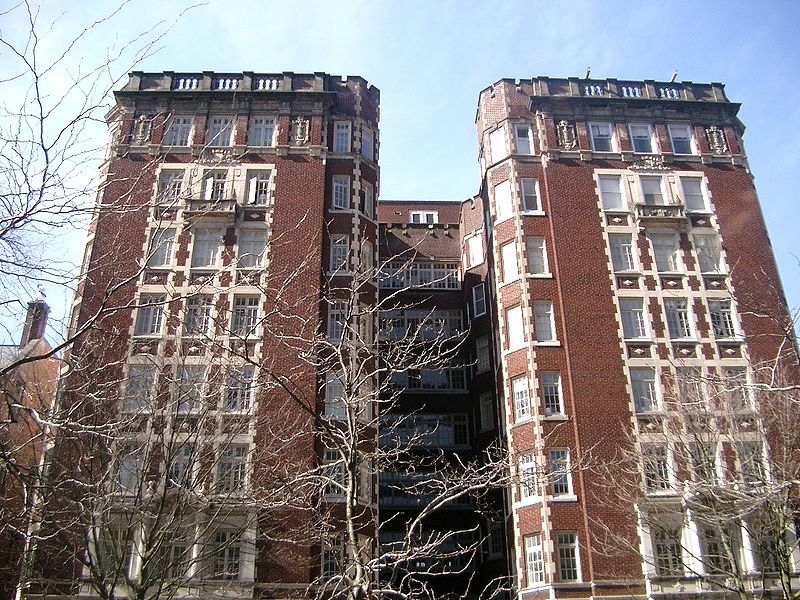 Ambassador Apartments. From Wikipedia. Image taken by Ajbenj on 3 March 2007. 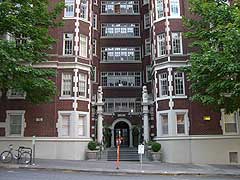 The Ambassador is one of the oldest and most celebrated residences in Portland. Built in 1922, it was designed by famed Northwest architect Carl L. Lind and is listed on the National Record of Historic places. Ownership of the building was transferred several times and in 1978 the Ambassador Apartments were converted to condominiums.

The nine-story building is built in Jacobean style – an early phase of English renaissance architecture with a free and fanciful use of columns, pilasters, round-arch arcades and flat roofs with openwork parapets -- featuring Columbian brick facing and cast Boise sandstone trim. It features tiers of bay windows and a crenellated parapet in the eastern recess. Noted lighting designer Fred C Baker designed the original exterior lighting fixtures located in the entrance recesses on either side of the front door. The front door with sidelights is also original.

The building is “H” shaped. The ground floor contains commercial units in the verticals of the “H” while the cross bar contains residential common areas. The front hall contains elevators and stairways while the back hall features an office, mailroom, guest room and manager’s apartment. The basement includes a laundry room, bicycle storage room and individual storage units. The building also features controlled access and a rooftop deck available to all residents.

Originally, the upper eight floors offered 6 units per floor – three in every vertical – each with two bedrooms and one bath. Due to alterations, there are currently 45 residential units including 1 studio, 3 one-bedroom units, 33 two-bedroom units and 8 three-bedroom units. Most units have been remodeled from the original footprint and no two are alike.

The Ambassador is located in downtown’s Cultural District, near the Portland Art Museum, Park Blocks and Portland State University. The light rail and streetcar are conveniently located within a short walking distance.