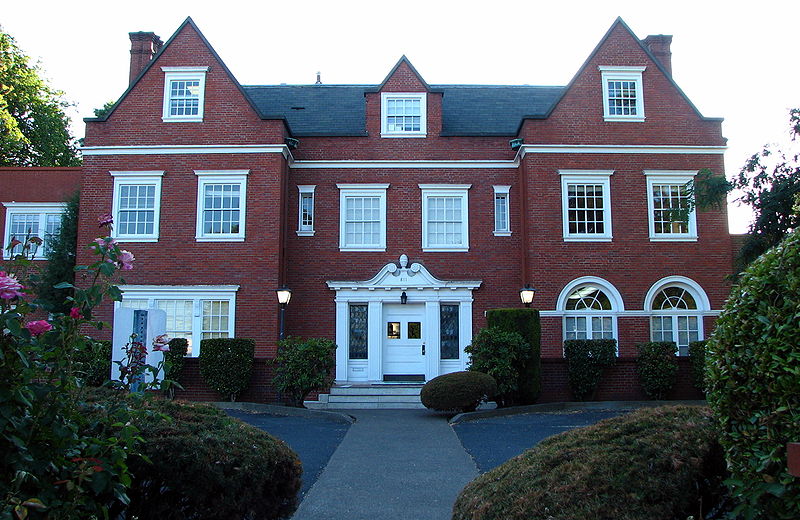 Entered in NRHP: 22 Feb 1991
Classified of Jacobethan style, this home was designed by Widden & Lewis and built in 1904.
It is now used as a commercial building.

Comments from the NRHP application, found HERE. (sic)
SETTING
The Ayer Residence is located on the northwest corner of N.W. Nineteenth and N.W. Johnson Street in a mixed-use area. Sited on a large city lot, the residence spans lots 3-5 and portions of lot 7 and 8 in Block 270 in Couch's Addition to Portland, Oregon. Oriented towards N.W. Nineteenth street, the building is set back approximately 80 feet from the street. A brick wall capped with brick coping defines the perimeter of the lot. The wall on the west side intersects the side of the building as docs the eastern wall. The front and rear yard has been paved with asphalt to accommodate the building's commercial use. Small shrubs line the east edge of the property at the sidewalk as well as the exterior of a brick wall that encloses the front terrace. A tall hedge of evergreen shrubs lines the south edge of the property. A small concrete block storage shed is built into the west end of the north brick wall. The west edge is defined by a high brick wall. Entrances to the two parking areas are located off of N.W. Nineteenth and N.W. Johnson streets. A central concrete walkway in the center of the front portion of the lot, leads to the building from N.W. Nineteenth Street

EXTERIOR
The irregular shaped brick building is two and one half stories and has a fully finished basement and attic The overall dimensions of the building are approximately 62 feet (north-south) x 100 feet (east-west). Composition shingles cover the steeply pitched gable roofs; segments of the slate roof, installed in 1923, can be seen on the side wall of me some of the dormers. The main north-south gable roof is intersected by smaller side gables and gable dormers; all the front and side parapeted gables arc capped with cast stone coping. The side wings and rear additions generally have flat roofs and the rear dormers have hip roofs. Four tall ornately constructed brick chimneys with compounded Hues break the slopes of gable roof; a fifth compounded flue chimney caps the center of parapet on the main rear- facing gable. The chimneys are
turned at a diagonal and are capped with corbelling. A projecting wooden molding extends around the perimeter of the building creating a shallow cornice visually separating the roof line from the lower stories of the building.
The front facade is organized symmetrically with two front-facing gables crowning the original end bays and prominent parapeted dormer windows situated directly above the central recessed bay. Two additions flank the original building footprint; a one story side addition on the north and a two story brick addition on the south elevation. These extensions have been set back from the original front facade. There have been tliree main brick one story extensions to the back of the building, however the original rear-facing parapeted gables with prominent end chimney, and the two-story rear wings still arc dominant features of the rear facade. The masonry walls are layed in a Flemish bond pattern.The fenestration on the original residence is symmetrical throughout and the opening of the majority of the windows are fitted with wide, eight over eight, double hung sash windows. Deep classical cornice moldings cap the window openings. Some of the other windows are multi-pane casements such as the narrow windows flanking the two second story windows in the central bay of the front facade. Unusual oriel windows grace the north elevation of the building on the second story; the double windows form a "W" in plan which compliments the twin parapeted peaks of the gables. Fitted with multi-light one over one double hung windows, the oriels arc crowned with a deep wooden cornice molding and supported by brackets. The windows on the side additions duplicate the original window proportion, panes and trim. A few fixed pane windows with metal sash were installed on the rear elevation additions. The most distinctive feature of the formally organized front facade is the entrance portico in the recessed central bay. The wide panelled front door with the upper panes fitted with clear glass is flanked with
sidelights embellished with textured glass windows divided by leaded mullions in a geometric pattern. A scrolled broken pediment surmounts the frontispiece of the entrance door. A ornamental finial carved in a leaf pattern is in the center of the broken apex of the pediment. Fluted pilasters support the pediment and flank the sidelights. Large square tiles pave the entrance terrace accentuated by a marble border designed in a rectangular pattern.
A door to the basement is located on the rear elevation and is accessed by a steep flight of stairs which descend to the basement door. Two doors on the rear elevation lead to the first floor rooms and a flight of metal stairs on the back of the building lead to the roof deck and a fire door to the attic. The fire door was installed in one of the rear attic dormers. A brick foundation supports the building.

INTERIOR
Over the years the interior of the Ayer Residence has been converted to commercial office space; however the majority of the room configurations and detailing have remained intact. The interior of the residence is organized around a central hall with the former living room and library on the south side of the entrance hall and dining room, kitchen and terrace on the north side. The original staircase which ascended from the west end of the hall, has been removed. A new staircase ascends along the north side of the hall; a portion of what appears to be the original large turned balusters and square newel post have been used in the new staircase. Raised moldings in large octagonal shapes with smaller square shape in the center decorates the ceiling of the hall.
The door and molding details have been retained in the living room, library, and dining room. A beautiful wide cornice molding comprised of dentils finished at the lop with an egg and dart molding extends around of the living room walls. The east end of the room is illuminated by a large classically detailed tripartite, multi-pane window. Large Tuscan columns with a capital carved with an egg and dart pattern flanks the central window. A large panelled pocket door on the west elevation of the room opens to the former library.
The library's wall are covered with painted mahogany panels and arc finished with a deep cornice molding. A door on the south side opens to an addition and double doors on the west wall lead to the what was originally a back entrance; additional office space as been added at this location. The diamond shaped panes in the leaded glass double doors are capped with a leaded glass transom in the same pattern. The original dining room is finished with a high wainscotting capped with a deep cornice molding. A semi-circular multi-pane tripartite window on the north elevation illuminates the formal room. French
doors on the west elevation lead to the original loggia. The room was enclosed in the 1960s with classically detailed arched windows which were fitted in the original openings. Arched openings on the north have also been enclosed. The second floor contains five main room and several small bathrooms and the main and back stair halls. A band of casement windows embellished with patterned glass divided by muntin bars, spans the west wall of the second floor stair hall. A door'at the south end of the windows leads to the back service hall and stairs which ascend to the attic or original servant's quarters and descends to the first floor back hall. The stairs are lined with wainscotting.
The original bedrooms, currently used as offices, retain their original door and window detail and trim. The north wall of the northeast bedroom is embellished with a beautiful marble fireplace. Classical columns support the deep mantel shelf and the hearth and firebox surrounds arc covered with marble. The attic is divided into six rooms. Five of the rooms retain the original beaded board ceilings and walls. The central room on the east side of the attic was a wardrobe room and is fitted with built-in cabinets and shelves constructed of fir.

ALTERATION
The building has been used alternatively as offices spaces since, in 1939, Dr. Coffee applied for a variance to use a portion of the building as office space for his practice. The residence was further converted into office space during the Schnitzers occupancy. The south side wing and extensions were completed between 1966 to 1968. The interior staircase was also removed during mis time period. The north wing was added in 1973 and the rear extensions were added between 1976 and 1985. The alterations to the interior of the building involve modernization and specialized use as office space. Many of the changes are cosmetic in nature including alteration for fire code provisions, environmental systems and security. Generally the interior of the original room layouts and structure are intact. The current owner is in the process of rehabilitating the structure which includes some restoration of interior wall surfaces and finishes. The plumbing and electrical systems are in the process of being updated.