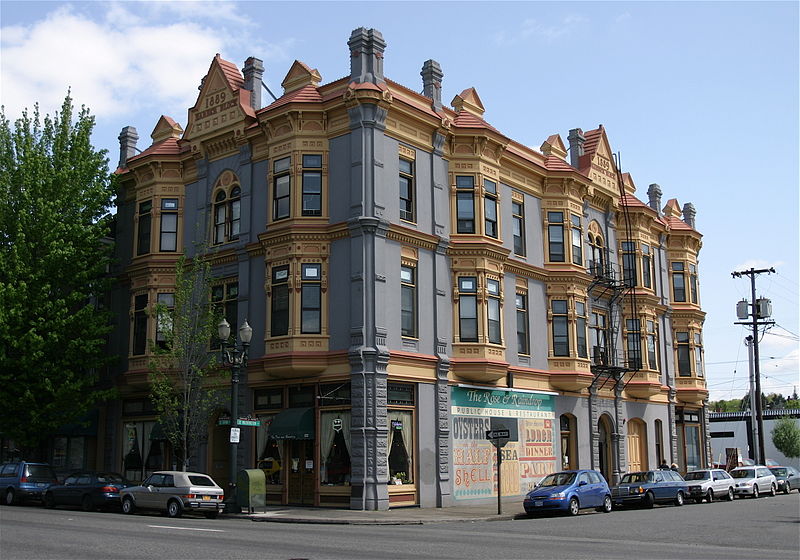 Entered in the NRHP: 15 Feb 1977
Classified as High Victorian Italianate, it was built in 1891
Originally used as a mortuary with apartments above, it is now used in the commercial capacity.
For more images, go HERE

The Barber Block is an excellent and unique Oregon example of late Victorian architecture, and a significant landmark in the development of East Portland. Though the design is somewhat late for the period (several commercial structures in the Richarsonian Romanesque style were built in Portland in 1889 and 1890), the Barber Block exhibits a rich and unusual assemblage of late Vistorian styles - Italianate, Eastlake, Queen Anne, "Romanesque", and even "Gothic" elements. The various styles are skillfully organized into a dynamic yet unified composition. The Barber Block is unique in that it is the largest structure of its type and style extant in the State.
It has been suggested that the architect for the Barber Block was Justus Krumbein, designer of the Oregon State Capitol and other prominent structures of the period. There is no evidence to support this contention. The Barber Block was one of the primary commercial structures in East Portland, and is today one of a few still Standing albiig Grand Alveriu'e that comprise the remaining evidence of a once thriving and independent.town. East Portland's history goes back to the 1820s when sites were cleared from tHe virgin forest land and / cabins built by the French-Canadian fur trappers of the Hudson's Bay Company. In 1845, Dr. John McLoughlin, acting as administrator for one of the Frenchmen's wills, sold the land that would become East Portland to James B. Stevens for $200. In 1861, Stevens, who saw great potential for the east bank offlhe Willamette River, founded East Portland. Because the rail and water transportazron facilities developed along the west bank, East Portland did not achieve the success of the City of Portland, but it did prosper for 30 years as an independent community.
A year after completion of the Barber Block (June, 1891) the citizens of Portland, East Portland, and Albina voted to consolidate the three separate towns. Unified Portland became a city of 80, 000, the second largest in the Pacific  States. Henry Barber was born in Albany, New York in 1832. As a young man Barber enlisted in the Army and served at various posts across the country, ending up in the Oregon Indian Wars of 1855. After discharge he settled on the Columbia River near Astoria and in 1860 moved to Multnomah County. In 1879 Barber entered the mortuary business in East Portland at Fourth and I Streets. He continued the business under his own name until 1891 when he formed the partnership of Barber and Hill. That same year the firm moved into their elegant new quarters which was described in H. K. Hines' History of Oregon as, "... the nicest business block in East Portland. " Hines further states .that, "Here he (Henry Barber) has without exception the finest undertaking rooms in the Northwest, if not all the Coast. "