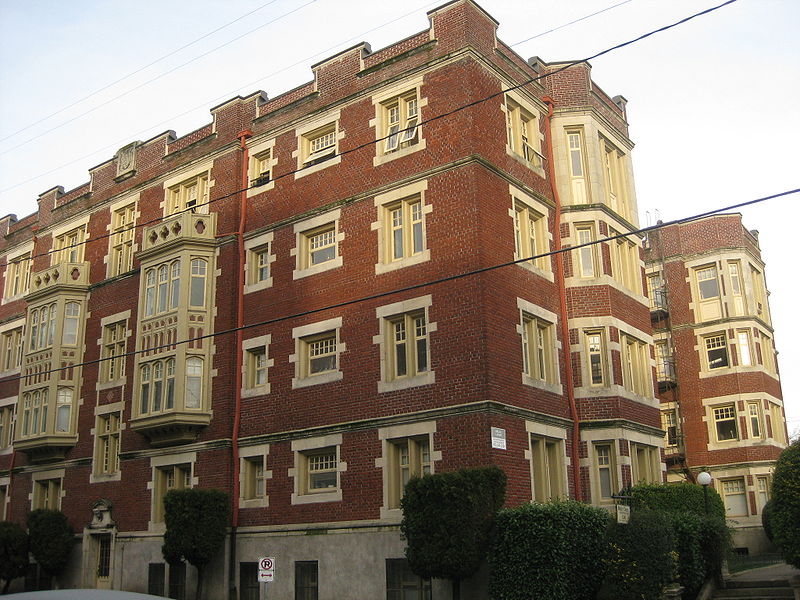 Comments from the NRHP application, found HERE
The Belle Court Apartment Building was built in 1912. It was style by noted Oregon architect Ellis Fuller Lawrence. The
brick and hollow tile and rises four stories in height atop a full basement.  The building is symmetrically composed in its elevations and its mass is essentially a U-shaped configuration having its central entry in the recess, which is planted as a forecourt. The building is finely detailed and features an elaborately framed enterance, oriels, or projecting window bays, thick stone mull ions, tapestry brick exterior facing, and cast stone ornament and stone moldings which provide contrasting accents against the red brick.

Belle Court was one of several first class apartment buildings constructed in the Nob Hill district of Northwest Portland. Such buildings were designed for the affluent city-dweller and were constructed using the most up-to-date fire-proofing innovations and modern conveniences. The Belle Court has served its original purpose to the present day in good repair, and the building has retained its integrity to a remarkable degree.
The building is located in the SE% Sec. 33, T. IN., R. IE., W. M, and it occupies Lots 8 through 11, Block 277, Couch's Addition to Portland, Multnomah County, Oregon. Situated on a rise of land, the building faces south, with its long axis oriented eat/west. It is enhanced by a well-tended lawn which is defined by a laurel hedge on the west, a wooden fence on the east, and a row of poplars at the lower, southerly end of the property.