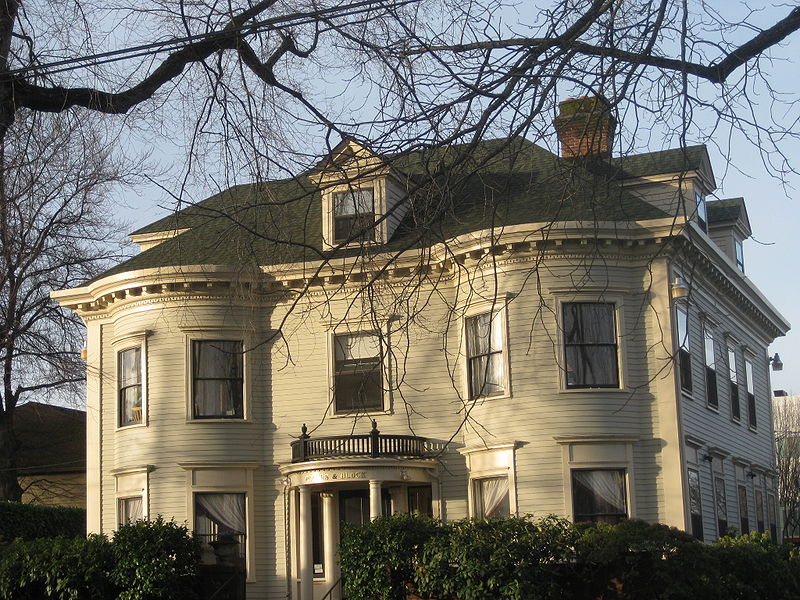 Entered in NRHP: 14 Jun 1982
Classified a Colonial Revival, this home was designed by Widden & Lewis and built in 1892.
This property is currently being used in the commercial capacity.

Comments from the NRHP application, found HERE
The house built for Winslow B. Ayer in 1892 at the northwest corner of Johnson and 18th Streets in the Nob Hill District in Portland, Oregon, was designed in the Colonial Revival Style by Whidden and Lewis, Portland's leading architects of the period. From the 1880s to 1930, the residential area surrounding 19th Street was among the most fashionable in the city, but modern-day commercial-industrial development has encroached on its periphery. The Ayer-Shea House is sited on a generous, double corner lot (100 x 100 feet) lined with mature laurel hedges five feet in height. The house is set back 30 feet from either street curbline. Majestic black willows and silver birches shade the front lawn. The entrance is 'flanked by large rhododendrons. These plantings help preserve the character of the property despite changes in surrounding land use which have introduced a warehouse, parking lot and printing plant to the immediate neighborhood. The Ayer-Shea House is of wood-frame construction and is 2 1/2 stories in height on a full basement with concrete floor and brick perimeter walls. Its square ground plan measures 42 x 41 feet. The house is oriented to the south, facing N.W. Johnson Street, and is fronted by an unsheltered terrace 10 feet in depth with brick guardrail. Exterior walls are clad with lapped weatherboards and trimmed with wide cornerboards. The hipped roof is presently covered with composition shingles. On the west elevation is an outside
stairway to the upper floors, and across the north, or rear face, is a porch with upper deck and railing. The construction date of these features is uncertain, but the railings have geometric stickwork panels reminiscent of Beaux Arts architecture. At the rear of the property, oriented at right angles to the central axis of the house, is a low, singlestory 12 x 36-foot concrete walled utility building and garage. The garage is attached to the house by a passageway extension from the central cross hall. While not a feature of the original development, it is comparatively unobtrusive. The principal, or south facade, reflects an interior in which the front two thirds is essentially formal in plan. Two tall brick chimneys with flared tops rise on either side of the core of the house occupied by the stairwell. Each facet of the hipped roof is broken by a dormer, those on the street elevations being pedimented gable-roofed types with double-hung sash with six over six lights. Each elevation is trimmed with an elaborate cornice—not a full entablature—including modillions, bed molding and fret molding. Typical window openings are trimmed with classical architraves, those of the ground story having added height created by plain inset panels. All first and second story windows have shutters and are fitted with double-hung sash. Those lighting front rooms have one over one lights. Those lighting rooms in the rear of the house have two over two lights.
The principal facade is organized with strict bilateral symmetry and has two distinctive features. The more prominent of these is a pair of semicircular window bays which are reminiscent of the cylindrical bow windows of the Sears House (1816) in Boston by Alexander Parris, though they are somewhat Richardsonian as well. The other distinctive feature of the Ayer-Shea House facade is the cylindrical portico with its two freestanding columns of the Tuscan order which is reminiscent of the portico of Benjamin Latrobe's Ashdown House (1793) in Berkshire, England. Originally, the Ayer-Shea Houseportico had a balustrade with square balusters and urn finials atop the posts. While the Colonial Revival was based on such Adamesque archetypes, the Ayer-Shea House is more eclectic than it is academic. It clearly reflects the contemporary work of William M. Whidden's former employees, McKim, Mead and White--foremost exponents of the Colonial Revival Style.
The interior of the Ayer-Shea House is organized around its central entry stairhall. The staircase leading to each of the upper floors is the core of the house. Hardwood flooring is used throughout principal rooms. Wall and ceiling finish is painted plaster, and major spaces are trimmed with elaborate, freely-interpreted classical cornices. Door and window trim is oak. Each of four chimneypieces has brick fire box surrounds and classical mantelpieces. Two of these are found on the north walls of front parlors on either side of the first floor hallway. The other two are located in corresponding positions in the front bedrooms of the second floor. The west, or so-called master bedroom, was divided into two spaces by a stud wall in remodeling undertaken by a recent occupant, the Christian Community of Portland. It was during the time that the Christian Community operated the house as a youth hostel also, that several bathrooms were fitted into minor interior spaces. The existing kitchen and dining facilities are in rear rooms on the second story. Third story storage and sleeping rooms are organized around a central corridor with lateral axis. The basement contains two longintudinal rows of steel pipe structural columns supporting wooden girders. Plaster finished stud walls enclose the furnace room on the east wall. The oil-burning boiler heats water for upstairs radiators.