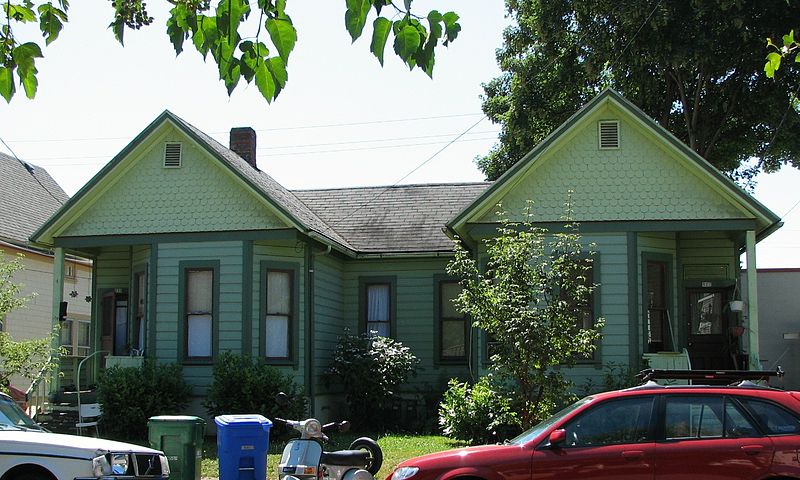 
Comments from the NRHP application (found HERE)
The Simon Abraham Duplex (1890) is a one-story duplex that is being nominated as part of the Multiple Property Submission entitled Historic and Architectural Properties in the Eliot Neighborhood of Portland (the boundaries of which are comparable to the original city of Albina). The Eliot Neighborhood is significant as a distinct section of Portland and is described in the Multiple Property Submission as one of the major contributors in defining Portland's present-day boundaries. The union of Albina and Portland in 1891 added to the socio-cultural history as it fostered a diverse working class, immigrant,
and minority community.
By 1882, when Albina was completely platted, the north end was designated as residential, with the area around Williams and Russell Avenues becoming the commercial core. The area by the docks on the river was mostly industrial. The area grew quickly and during 1880-87 Albina's population climbed from 143 to over 3000. With the progress of the streetcar system, other subdivisions to the east of Albina, many considered to be high-class communities which employed building and ethnic deed restrictions, were developed. Thus, many immigrants settled in the Albina community where housing was more affordable and located closer to the commercial center, railroad yard, grain mills, and waterfront. Higher density house was being built at a faster pace by 1910. The ethnic migration to this area during the 1880s-1920s, primarily from eastern Europe, was concentrated in Albina which would come to serve as the gateway for immigrants newly arriving to Portland. There was an early Scandinavian community on lower Russell Street, and the presence of Japanese and Chinese business
owners in Lower Albina on Russell Street and Albina Avenue.  It is believed that this duplex was constructed by Robert Gee, a carpenter who resided in East Portland.  Although he sold the lot to Henry McMillan, a constable in the same area, prior to the construction of the building, it was common practice for investors to buy property and have the builder construct a spec
house. The property with the completed duplex was not bought by Simon Abraham until December 1890. Simon was a German-born barber who had immigrated to the United States in 1875 and ran a barber shop on Front Avenue. He and his wife, Pauline, moved into the unit on the west side of this building a few years after they purchased it and lived here until 1907, a few months before Simon died at age 58.  M. Glenn Osterhout bought the property as an investment and was a storekeeper for Portland Railway, Light & Power Company. Osterhout sold this rental property to Herman Moeller, a mortgage
broker and investor, under the name of Star Investment Company in 1914.  Mr. Carl Knapp bought and lived in the east side of the building in 1923. Knapp was a cargo supervisor for McCormick Shipping Company. He lived here into the 1960s. There were several subsequent owners before the current owner purchased the property in 1998.
This one story building is a wood framed duplex with a hipped roof main mass with two front facing gable ends in which the entrances to the units are located. The symmetrical quality of the overall building is unique for the Queen Anne Victorian period, however, each unit encompasses the asymmetrical quality usually found in these kinds of buildings. The tall narrow windows on the front and side elevations are typical of the Victorian period and nearly all of the original one-over-one wood
windows remain. The exterior was resided with "raked shakes" in the 1960s. There are two recessed front porches with tongue-and-groove floors. The original spindles and balustrades were removed during residing and the shakes were extended down in an arched effect in the 1960s. Brackets above the cut-away portion of the bay windows were removed, but the fish scale shingles survive under the shakes on each of the gable ends. There is a rear addition constructed c. 1940s as estimated by stylistic features. The interior floor plans of each unit mirror each other. The original woodwork remains throughout much of the house, including picture molding, tongue-and-groove Douglas-fir floors underneath more modern floor coverings, window an door surrounds with bulls-eye corner blocks. The arched openings were between the foyer, parlor, and dining room were installed during the 1930s when the openings were widened.
The duplex has Queen Anne stylistic influences, even though most of the decorative features have been covered or removed. As stated in the Multiple Property Submission, "Because so few properties survive from that time period [late 1800s and early 1900s], they will not need to display all of the elements mentioned in the previous description section to qualify for registration. In fact, most extant examples should qualify due to their rarity." The massing, windows, historic interior features, and configuration remain. There are plans to expose the wood shingles in the front facing gables and to rebuild some of
the decorative woodwork. The Simon Abraham Duplex is significant for its rarity as a late 19th century building, a rare building type as one of few duplexes built during this period, and for its association with the social history of the area.

EXTERIOR DESCRIPTION
The two storey Simon Abraham Building is a wood framed duplex with a symmetrical front layout of the Queen Anne Cottage architectural style.  The Queen Anne is seldom built in symmetry but often when the structure is a multi-family dwelling where each unit alone is asymmetrical. Common in Queen Anne Victorians, the roof is of a steeper pitched hip form with gable ends at the bay windows. Also typical in Victorians are the tall and narrow windows present oh the front and side elevations. Nearly all the original one-over one window sashes of old growth red cedar construction survive. Over the years some
alterations were done but most were minor and only one permit for plumbing changes in 1931 survives.(6) According to an elderly resident down the street, the entire exterior was resided with shakes around the 1960s in order to reduce painting maintenance. During this process, most of the exterior Victorian ornamentation at the gable ends and porches was
removed along with all corner trim. During proposed restoration, the trim and some ornamentation is planned for replacement.
At the north elevation (front), there are two recessed front porches at the ends identical in form. The porch floors are tongue and groove elevated over 3' from the ground. The gables cover each porch above supported by posts at the corner. Original spindles and balustrades were removed during residing and shakes were extended down in an arched effect about 30 years ago. On the west side (522), the original red-cedar front door of Victorian design survives with a glass pane. On the east side (530), the front door was replaced with a multi-paned type during the 1920s or 30s. Adjacent to each porch is a
gabled cut-away bay window. Sandwich brackets above the cut-away portions were removed during residing. Fish scale shingles survive underneath the shakes on each gable and planned for restoration. Between the bay windows is a recessed area with two simple double-hung windows that light the bedroom on each side.
The west and east elevations (sides) are nearly identical except for a few minor differences.  Each side has a single pair of double-hung windows that light the dining rooms inside. As in front, shakes cover the original clapboard siding common on
many Victorian structures. On each side, a narrow sidewalk runs against the side foundation to the rear. On the west side, a back door is at the north end of the west facing wall of the rear addition. On the east side, there is a small single pane window near the north end that lights the foyer area. The corresponding back door is in similar placement but the addition setback is only 5' instead of 12' on the west side. The east side also differs due to a subterranean door at the south end of the addition for basement access.
The rear elevation is dominated by an addition 27' wide and 10' deep done some time around the 1940s. No permits for this addition exist in the City of Portland building archives and the age is estimated by stylistic characteristics. The roof pitch on
this side is shallow and shed like. Some of the wooden windows have been replaced around the 1980s with aluminum frame counterparts but retain the same configuration. At the southeast corner, short sets of 1940s vintage double-hung windows remain.

HISTORY OF THE PROPERTY
In July 1884, Frederick W, Drayton purchased lot 23 of block 1 in Albina from James B. Montgomery. Within a few years, he moved to Arizona and sold the entire lot to Robert Gee for $475 on 12 February 1889.(2) Robert Gee was a resident of East Portland residing on present day NE Grand Avenue south of Sullivan's Gulch and listed as a carpenter.(4) He is believed to be the builder of this duplex even though he sold title of the property before it was started. On 4 April 1889, Robert Gee sold 'the lot to Henry F. McMillan for $675. McMillan was listed as a constable who also lived in East Portland. On 6 April 1890, Henry McMillan took out a mortgage of $1000 from Lombard Investment Company to begin construction of this duplex, apparently a speculation project. Since he did a deal with Robert Gee, it is very likely he contracted with Gee for erection. It was a common practice in Albina's early development for a builder to first purchase a lot and an investor would soon buy it and have the same builder build a speculation home. On 10 June 1890, Henry McMillan sold the property with the completed duplex to Peter W. Severson for a consideration of $3000.(2) Severson was a pioneer Portland businessman who came to the Portland area in 1858 and started out as a wagon builder. Since the late 1880s, he lived on the south side of Belmont Street on the west side of Mount Tabor. He was a notable Portland citizen and when he died in 1912, he gave $200,000 to Willamette University, the YMCA and the YWCA.(3)
On 12 December 1890, Peter Severson sold the property to Simon Abraham for $3000. Simon Abraham was a German born barber who had a shop on Front Avenue. He may have planned the duplex as a retirement residence since it was on the eastern edge of development at this time. Within a few years, he moved into the westerly unit (408 San Rafael, old address, now 522 NE) with his wife Pauline. Simon Abraham was born in Germany around 1840 and immigrated to the United States in 1875. He rented the easterly unit (old address 410 San Rafael, now 530 NE).(8) On 11 December 1907, the Oregonian index stated he died at a reported age of 58. A few months previously, perhaps due to ill health, Simon and Pauline Abraham sold the duplex to M. Glenn Osterhout for $4000. Mr. Osterhout was a storekeeper for Portland Railway, Light & Power Company. He purchased the duplex as an investment and lived at 455 W Park (old address), and later listed as the purchasing department manager for that utility. In 1914, Osterhout sold his rental property to Herman Moeller under the name of Star Investment Company. Mr. Moeller was a mortgage broker in addition to managing and owning investment properties. He lived at 1542 SE 25th. In 1923, the duplex was sold to Carl W. Knapp who moved into the 530 side, Mr. Knapp was a cargo supervisor for McCormick Shipping Company and remained in the duplex into the 1960s.(4) Since then, it went through several owners as an investment property in run down condition until sold to the current owner in December 1998.