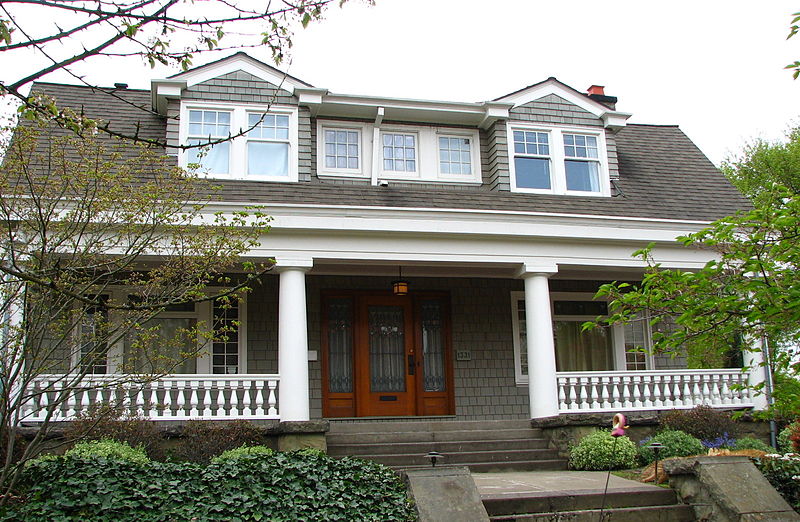 Enlisted on the NRHP:  28 Feb 1991
Classified a Dutch Colonial/Colonial Revival, this home was designed by Emil Schacht and built in 1909.
Zillow site:http://www.zillow.com/homedetails/1331-NW-25th-Ave-Portland-OR-97210/53872157_zpid/
Currently for Rent!
Further images can be found HERE

SUMMARY
The two-story Dutch Colonial house designed for Christine Becker, the widow of Rudolph Becker, Sr., by the Portland firm Emil Schacht and Son was built in 1909 and featured in the September 1910 issue of Northwest Architect, a regional building trades journal. The house is located on NW 25th Avenue at Pettygrove in northwest Portland, Oregon and is notably well preserved and maintained. A two-bay garage having a gable-end front and exterior finish work to match the house is an historic and separately-contributing feature at the southwest corner of the generous double lot. The garage has its original shingle siding, although overhead doors are replacements of the original folding doors. The house meets National Register Criterion C as an outstanding example of the work of the German-born Schacht in the American Colonial idiom. Schacht's career in Portland spanned the period 1885 to 1926 and produced a sizable body of work, including over a hundred mid-scale houses in the Arts and Crafts and Colonial Revival styles. The Becker House is rated an outstanding representative of the latter category, a judgement evidently shared by Schacht's contemporaries who selected the house for publication shortly after its construction.
The long axis of the rectangular mass of the house is presented to the streetfront with the ridge of the gambrel roof parallel with a recessed porch extending the full length of the formally-composed facade. The porch, with its central approach, is detailed with a full Classical entablature supported by sturdy round columns having oversized cushion blocks. The columns are joined at the base by a railing of turned balusters. On the north end elevation facing Pettygrove Street, a pergola made up of similar membering  originally served as a porch sheltering the French doors giving access to the den. The present owners are contemplating reconstruction of this missing feature. The north end elevation also is distinguished by an outside end
chimney that bisects a split fanlight at the gable peak. The chimney facing and foundation are of random coursed ashlar
designated by the architect as Tenino blue stone, a regional basalt that was sought after as a building material. A distinctive
feature of the facade is the prominent dormer composed of two gabled dormers with cornice returns linked by a recessed three-bayshed dormer. Original shingle cladding was replaced under a previous ownership by synthetic weatherboard siding but without impact to the character-defining trim detail. Wood window sash are intact on the ground story, but second story windows have replacement aluminum sash. The present owners are considering reversal of the modifications in due course. The Becker House is a competent rendering of the Dutch Colonial style in a residence of moderate scale. It is truly noteworthy, however, for the quality of its interior, which is organized around an especially handsome central reception stairhall in which a column screen and arch order employ boxed fluted Ionic columns and pilasters of the Scamozzi variation wherein volutes of the capital radiate at an angle of 45 degrees. In the dining room an elegant Jugendstil character is expressed in mahogany ceiling beams, high wainscot, built-in buffet cabinetry and transom window.