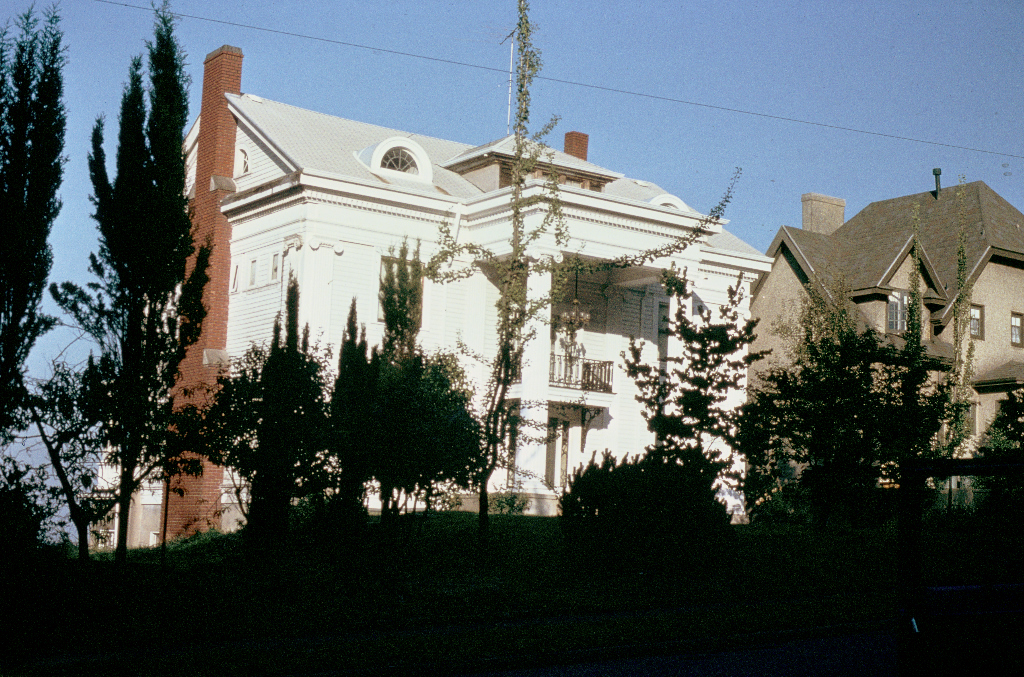 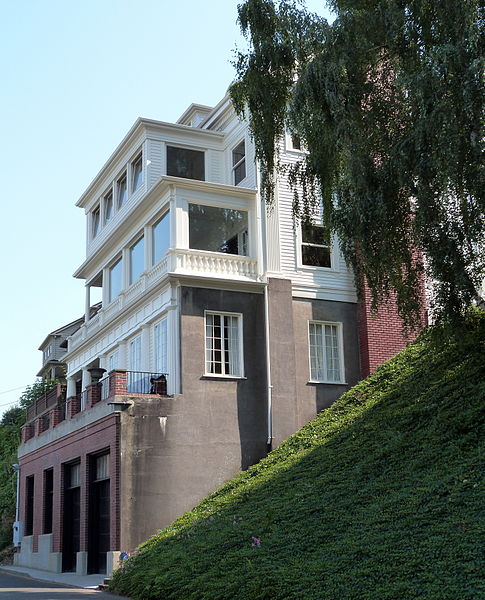 Entered in NRHP: 2 March 1979
Classified in the Georgian style, this home was designed by Henry C. Dittrich and built by Hiram E. Wood in 1913.
Zillow site:  http://www.zillow.com/homedetails/2847-NW-Westover-Rd-Portland-OR-97210/53984478_zpid/
Other images can be found HERE. and HERE.  The latter contains images taken in 1914 - just after completion.  They're lovely.

Comments from the NHRP Application (found HERE)
The Ashley residence is an exemplary embodiment of a Georgian-style period house. Built in 1913 by Henry C. Dittrich, architect, for Mark A. M. Ashley, a prominent early Portland banker, its general condition today is exceptionally sound and stable, permitting its continued use as a single family residence.
The house is located in Section 32, Township 1 North, Range 1 East, Willamette Meridian, on property described locally as Lots 4 and 5, Block 4, Westover Terraces, City of Portland, Multnomah County, Oregon. It faces toward the southwest with its longest dimension oriented in a northwest to southeast direction and is situated on the east side of Westover Road in Westover Terraces, one of Portland's earliest and finest exclusively residential developments. (1) Originally designated as 1095 Westover Road, the address was changed in 1934 to 2847. Measuring approximately 44' x 31' at its Westover Road level, the house is of basically rectangular configuration. Although appearing from the front to be a three-story structure, it actually rises five stories above Summit Avenue, a quiet side street located immediately to the northeast of and 24 feet below Westoyer. The first two stories are of reinforced concrete and the upper three stories are of frame construction terminating
in a gable-style roof with a hip-roofed dormer extending axially fore and aft. A red brick chimney situated on the left side of the house extends upwardly from below Westover to above the roof ridge. The salient features of the house as originally constructed are described in the text and photograph of an article appearing in the January 25, 1914, issue of THE OREGONIAN. As disclosed in the article and enclosed photographs, the front and sides of the house exhibit the classic hallmarks of Georgian design: rigid symmetry, an axial entrance, geometrical proportions, sash, windows, and a raised (at least partially) basement. Missing only^ are the hipped ends of the main roof characteristic of most Georgian designs. A large portico supported at the front by two large Ionic columns and surmounted on three sides by a balustraded widow's walk protects the front entrance and overhanging balcony, the latter being surmounted by its own wrought-iron railing. Located behind each column and at the four corners of the house are equally large Ionic pilasters. Poised above each pair of front windows is an eyebrow window protrudingin dormer-like fashion from the roof plane. A second pair of eyebrow windows appears in the rear roof plane. The entire exterior, including siding, columns, pilasters, and other trim, is of cedar painted white and is in good sound condition. The capitals on the columns and pilasters are of horsehair-impregnated plaster.
The only significant alterations to the front and sides of the house are the removal of the widow's walk balustrade and pedestals and the addition of a wrought-iron portico lamp. Referring again to the newspaper article of January 25, 1914, the
salient features of the rear of the house are seen to include the red brick facade of the garage level, the balustrade, Doric columns, and French windows of the terrace level, the balustrade, Tuscan columns, and partially glass-enclosed observatory porch of the Westover level, and the two enclosed sleeping porches of the first level above Westover.
Alterations to the rear include the removal of the balustrades at the terrace and Westover levels, the replacement of the multi-paned windows of the observatory porch with large single-paned view windows, and the removal of the two sleeping porches.
The original internal spatial organization and interior finish are also best described in the article of January 25, 1914. Subsequent alterations to the interior by a previous owner have been substantial and include the evisceration of the maid's quarters, laundry, and fruit closets of the terrace level, the dining room, kitchen, and pantry of the Westover level, and the bathroom of the next level higher. The main staircase from the Westover level to the attic has also been replaced by an enclosed stairway. The remainder of the interior is substantially as described in the Oregonian article. Even the elevator
remains fully operational, rising the full five stories in its own reinforced concrete shaft. Moreover, the attic, encompassing about 1,200 square feet, has been finished to provide relatively comfortable, yet temporary, living quarters. All of the alterations to the house are thought to have been made between 1961 and 1975.
Work in progress includes the restoration of the missing widow's walk and other balustrades (the balusters and some rail sections were saved), the reconstruction of the two sleeping porches (according to a previous owner, too far deteriorated for salvage although some parapet materials were saved), and the complete restoration of the interior including the
reconstruction of the main staircase (some balusters and rail sections were saved). The front of the house was redetailed (new capitals and dentils) and repainted in 1975. The remainder of the restoration is slated for completion over a period of years.
(1Westover Terraces was developed in 1910-1914 by hydraulically sluicinc almost 3,000,000 cubic yards of material from high atop Goldsmith Hill located on the then outskirts of Portland, washing the material down over a multitude of sheerboards to create the many terraces forming the development, and then down still further to partially fill in Guilds Lake and form a flat industrial area. Although viewed at first with skepticism and ridicule, the development was hailed at its completion as an engineering marvel and, perhaps with more than a little puffery, as "without exception.. the finest residential section in the United States.")

STATEMENT OF SIGNIFICANCE
The significance of the Ashley residence is, first, its architectural importance as a quintessential example of a Georgian-Revival style period house and, second, its association with its first owner, Mark A. M. Ashley, a prominent early Portland banker. The architect, Henry C. Dittrich, although presumedly practicing in the Portland area for a number of years,
was apparently not well known. As disclosed by the accompanying photographs, the house is a well-executed
embodiment of a Georgian-style period house, displaying a successful marriage of the decorative vocabulary of the Georgian period with the scale, site orientation, and style of the period house. The facade is of classic Georgian design incorporating accurately proportioned and detailed columns, pilasters, capitals, and entablature of the Ionic order. This symmetry and style is carried around to the sides of the house as well.  The facade is 44 feet wide by 25 feet high, and the two front columns are over 18 feet high and over 6 feet around at their base. As far as can be determined, the details of the facade follow precisely the proportions of the Ionic order as set down by Vignola.
The rear of the house displays equally well-executed examples of the Doric order in the columns and entablature of the terrace level, and the Tuscan order in the columns and entablature of the Westover level. The exact style of the two missing sleeping porches has not yet been determined (the only known photograph of the rear of the house as originally built is
that in the article ofsept.13,' l4 although they were surrounded by a parapet pierced by triangular openings, a classical design (the parapets were saved and will be reinstalled during restoration). In spite of its treatment at the hands of previous owners, the house is in exceptionally sound condition and serves as a reminder of a style of architecture and craftsmanship
not lately practiced.
The person for whom the house was built, Mark Anthony Miller Ashley, was best known as a prominent early Portland banker. Born at Fort Ann, New York, in 1863 of a family that arrived in the United States from England about 1630, Ashley attended high school and college in New York before coming to Portland in 1883 at the age of 20 years. Once in Portland, he
became engaged in the streetcar advertising business and later in the real estate and mortgage loan business. In 1907, he founded, with his brother-in-law, C. E. Rumelin, the banking house of Ashley & Rumelin, of Portland. The Ashley & Rumelin Bank became the Ashley State Bank in 1925 and went out of business in 1928; however, Ashley remained active in financial
matters, founding the Tenet Mortgage Company which exists to this day.

Mr. Ashley was married in 1889 to Mabel W. Willis, a daughter of Parrish Lovejoy Willis, a prominent Portland attorney. Mr. and Mrs. Ashley moved into the house upon its completion and lived there until their deaths four months apart in 1939. They had two sons, Willis S. and Roscoe G., both of whom remained active in family financial affairs until their deaths in 1963 and 1947, respectively. Roscoe was the last member of the Ashley family known to have lived in the house. Roscoe 1st son, Robert N., continues the family interest in financial matters as the current president of Tenet Mortgage Company.
During his lifetime, Mr. Ashley was noted for his continuous connections with the interests of Portland and his devotion to the operation of a business that was a prominent feature in the banking circles of the day. He was recognized for his keen perception and honesty of purpose as well as his interest in and support of numerous projects for the general good of the people of Portland.
The house is recognized by the City of Portland as a designated historical landmark both for its architectural significance and for its association with the Ashleys. The architect for the house, Henry C. Dittrich, was born in Schoenstaett, Germany, and lived in Portland for about 30 years before his death in 1927 at the age of 74 years. Although he is listed in early Portland city
directories as a practicing architect T little is known of his other works except for a brick and frame church at the northeast corner of S.W. Tenth and Clay in Portland that he is rumored to have designed. The builder of the house is thought to have been Hiram E. Wood of Portland.